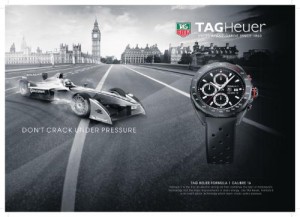 The Future is Electric:

The event officially inaugurates the pioneering Swiss brand’s latest adventure in motor-racing, which starts 13 September inBeijing and closes 27 June, 2015 in London. TAG Heuer is the Official Watch, Partner and Timekeeper of the FIA Formula E Championship for all ten events, a role it has played several times over the decades, for major motor-racing series and circuit around the world, from Formula One in the 1970s to Indy 500 in 20XX and the Monaco Grand Prix today.